“If I was a future poet and was busy choosing my place of birth, then I would very much consider the city of Würzburg. ” -Hermann Hesse

After my  two-and-a-half week-long intensive German language course, I had three weeks off before my university courses began. Amazing right? By the second week, I was recovering from a surprise surgery, so I was only able to do a few of my travel plans during this vacation time. I have German health insurance and was able to heal for two weeks before my courses began so it wasn’t so bad overall.
My first week off was rainy in Bavaria/Franconia, but during the beginning of the week we only experienced light drizzles with some sunshine. By the end of the week, it was raining much steadier. So fortunately for me, I was able to enjoy my excursions to Bamberg and especially Würzburg. And in this post, I will be sharing my experiences in Würzburg and adding a little history in the mix too. Würzburg is the first destination on the “Romantic Road”  in southern Germany and a must-see city in Bavaria/Franconia. I’ll tell you why I think that…

I did my first city tour alone in German (language) and really enjoyed it…
I paid 5 euro (as a student) to participate in the tour. The tour lasted about 90 minutes. When travelling to a place for the first time, I truly recommend doing a tour because tour guides are experts on the city and can point out minor details that average eyes would overlook. I’ll give an example:

This is a depiction of Mary receiving the news that she will have baby Jesus. If you look closely at the tube coming out of the man’s beard, you will see a little baby sliding down “being whispered into Mary’s ears.” This is on the Marienkapelle church (see below), which I’ll discuss in more detail after I discuss the tour.

When everyone introduced themselves, the tour guide asked me if it would be okay for me that the tour was in German since I was American. Really Germans are surprised when non-natives speak their language at a high level–I don’t think she was being condescending. She spoke standard German and not too fast either. She didn’t use many words that I hadn’t heard before; although, I can’t speak as nice as her in German yet. In comparison to the boat tour I did in Hamburg the following weekend, where the tour guide spoken much faster with more slang and specialized Hafen vocabulary, the German vocabulary about art, architecture and history was much easier to follow. I loved doing the tour in German because it felt more authentic and less touristy and !!exciting!! as some of the tours for English-speakers. There is the stereotype that Germans keep distance and don’t like bodily contact, but our group tour felt very intimate and friendly. I was also the only student among middle-aged German couples and a group of blind people who were brave enough to do the tour with us seeing-people. Maybe doing the tour in Würzburg is what gave me more appreciation for the city compared to not doing a tour in Bamberg.

Now I will take you along the tour..

The tour began at the Falkenhaus, which was built in 1751 and features ornate stucco façade. It is the yellow being in the third picture below and happens to be where the tourist center is located. We spent a lot of time talking about the late gothic Marienkapelle church (that includes the depiction of Mary I described earlier). This church was originally built from 1377 to 1480. The figures in the fourth picture below are of Adam and Eve. They are works from Tilman Riemenschneider (although, the originals are actually in the Mainfraenkisches Museum in the city). The interior of the church had to be replaced after 1945, but some paintings and sculptures are original. Riemenschneider is known for his melancholic figures. The tour guide asked us what we thought about one of his sculptures of a man inside the church and there were many creative answers. I was thinking “nachdenklich” (pensive) but “melancholisch” is the adjective she was looking for.

After the church, we visited a memorial of the destruction caused in WWII which is located near the new city hall.  I’ll discuss this more under “what I learned.” Our next stop was the “old main bridge”:

​​Alte Mainbrücke ~constructed 1473-1543 in place of an old Romanesque bridge. The Saint statues were added around 1730. Due to this bridge, Würzburg is often compared to Prague. Some people on the tour also thought of Heidelberg. What do you think?

We briefly got to discuss the Neumünster (church) and Cathedral of St. Kilian, which are located beside each other. Both of which I’ll discuss in more detail shortly.

Next to the churches is a little garden~ Lusamgärtchen is the monument for Walter von der Vogelweide, a Minnesänger (mindstrel/medieval singer) who composed and performed love-songs and political songs (“Sprüche”) in Middle High German.  There was even a bard there to serenade us. If you have Liebeskummer (lovesickness), you can leave a note here.

I asked if Martin Luther had been there. Yes, he had. I also read online somewhere that he hid in a castle but I guess it wasn’t in Würzburg because she said “Er hatte keine Chance” (“Martin Luther had no Chance.”) The catholic power was too strong to be changed by Luther.

But the Peasants’ war did reach Würzburg and they hurt the famous Tillman Riemenschneider’s hands so he couldn’t do his work anymore. Here’s a synopsis of the Luther-Riemenschneider-peasant-revolt situation:

Würzburg is a city of Dienstleistung (service) and Studenten–not a industrial city. Wine is produced but it is not enough to support the whole city.

Churchill und die Alliierten (Churchill and the allies): historians aren’t sure why the British (under Churchill instructions) decided to bomb and destroy the city. It was a city with a middle-large population but not much industry. So was it really a strategic move? Or were they rücksichtlos (ruthless)?

Die Käppele (pilgrimage church) which was built 1748-1752 was not destroyed in the war. Würzburgers are very proud of it. I didn’t get to visit this church and could only admire it from afar at the bridge. Here is a photo of it: 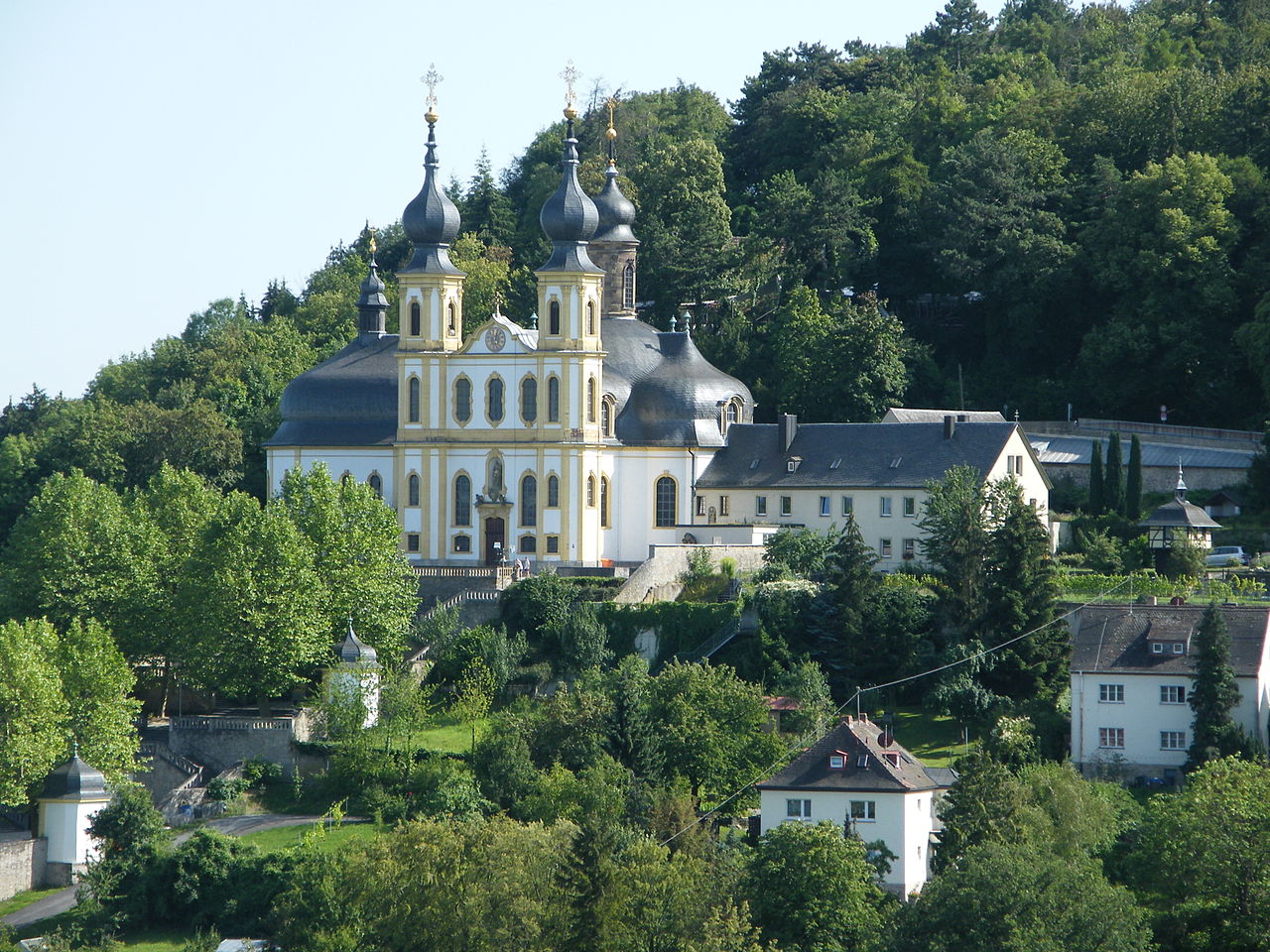 The Catholic Church had all the power. Once the church and state separated in 1802/3, Bayern took Würzburg for their kingdom.

Some relevant points of history I adopted from the visitor’s guide:

What I did for the rest of the day & my impressions:

The tour ended at the perfect time to be able to attend the meditation session/organ ceremony at the Cathedral of Saint Kilian. This church is the fourth largest Romanesque cathedral in Germany. The construction started 1040 and the east towers were finished in 1237. You may notice the mix of architecture styles. It was also burned out in 1945 but some original Baroque stucco remains inside. I decided to record it (although I missed some of the beginning) since my fellow students had a chance to participate in an Atlanta-based project where religious ceremonies are recorded and basic information is shared about the service. I only recorded the sound but I edited the photos of the church where the ceremony took place. Doesn’t the organ sound amazing?

~Fortress Marienburg: First served as a refuge during the Hallstatt era (1000BC) Construction started around 1200 AD. It later served as the seat of Prince bishops from 1253-1700. It was remodeled into a Renaissance castle in 1600 and after Swedish conquest, it was expanded into a Baroque fortress with royal gardens in 1631. It was really huge! And quite a climb up there. I wish I would have had time for a tour of the castle, but I was able to visit the Fürstenbaummuseum there. I’ll share a bit about it.

Some museums are so large that you practically get lost. This museum was relatively small. It was about the living quarters of the Prince Bishops and some treasury. Many of the older items weren’t so interesting in my opinion and the museum didn’t really tell a cohesive story until the modern section, which featured city history. One painting there really impressed me. It is a depiction of the Mainbrücke after the bombings of WWII.

After seeing the fortress I wanted to see the interior of the last of the three main churches: Neumünster~ Romanesque basilica from the 11th century. Additional construction was done as late as 1716 when the Baroque façade was added. It was erected at the grave of Saint Kilian.

I have seen many ceiling paintings in German churches but never any paintings like the ones hanging on the walls of this church.

My final stop: UNESCO World Cultural Heritage Site~ Residence Palace: Constructed 1720-1744. It is a principal work of South German Baroque era architecture and one of the most important castles in Europe.

Every proper castle or palace has a garden. I learned that on the city tour in Erlangen during my orientation week (I may write a post later about the university castle & garden in Erlangen.) How many though have such a beautiful garden as Würzburg does?

I did not have enough time to see everything (such as going inside the Residence Palace) and had to hurry to cover the main areas. There are still a few things I’d love to see there, and I hope I will be able to go back when the weather is nice.

To conclude, I want to return to the quote from Hermann Hesse… For those who understand German, take a quick look at this Wikipedia article.

Hermann Hesse happens to be one of my favorite German authors. His book, Siddartha, was such a powerful story. Do you have a favorite novel by Hesse?  I’ll paraphrase what the Wikipedia article had to stay about Hesse in English. He did some travelling and wrote in different cities, different countries. He spent some time in Würzburg, where he even wrote a text “Einst in Würzburg”. He gave the city the best compliment: “If I was a future poet and was busy choosing my place of birth, then I would very much consider the city of Würzburg. ” -Hermann Hesse

I hope you enjoyed reading this post almost  as much as I loved being in Würzburg.

This blog started as a writing project while I was studying abroad as a German language major in Erlangen, Germany. You can find articles on culture, languages, traveling and personal reflection. View all posts by Stephanie F.

BEST OF THE BLOG

Hello hello! Follow me on my journey as an American exchange student in Europe.