September 1, 2017: I saw a concentration camp for the first time this week. I was in Munich before I traveled to Erlangen. I went on a tour to Dachau. Even though I was physically at the place, it was still hard for me to picture the terror that occurred there. Because something so terrible, yet so controlled is simply unthinkable. The tour guide really knew a lot about the history of the concentration camp and I learned a lot of details that I previously did not know. For example, that Dachau was used as a safe place for refugees in the 1950s. 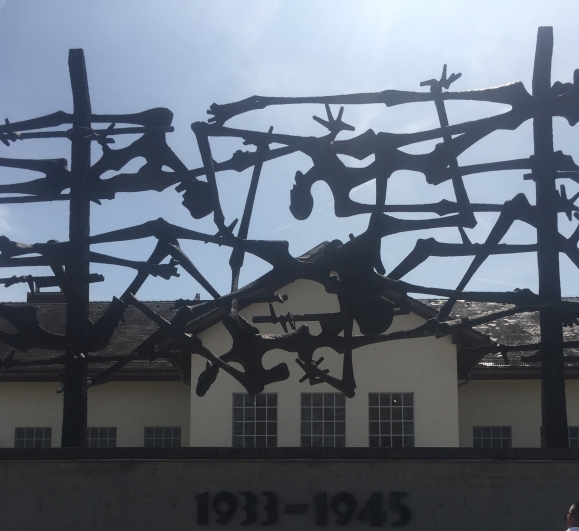 Dachau was the model for other camps. It was first. The quote on the front gate of the camp reads “Arbeit macht frei.” Working was supposed to “rehabilitate criminals and other wrong-doers.” There were some German speaking victims who lived in the camp, but many came from different countries and could not speak German. The largest group of prisoners came from Poland, followed by Germany and then citizens of the former Soviet Union. Therefore, some of them could not even understand these quotes, which were supposed to guide their every-day thinking. As soon as they arrived at Dachau, prisoners were stripped of their individuality and basic human dignity. It did not matter if they had a uniform that fit or shoes that matched. Their entire body was shaved. They were placed into a category according to “the crime that they committed.”  (See below.)

Apart from having to work 12-hour shifts after only eating a thin soup, the victims were subjected to various types of torture by the guards. The fear and discipline there was so intense that guards barely had to supervise when prisoners admitted new prisoners or had a role as a leader among fellow prisoners. Many prisoners died from starvation and diseases since hygiene was so poor and quarters were so close. Although the Nazis tried to keep it hidden, many prisoners committed suicide by jumping onto the electric fence surrounding the grounds.

The first crematorium was too small to keep up will all the deaths and a second had to be built. (The second featured disinfection “showers” in one part of the building.) Apart from the physical abuse from guards (some really awful forms of torture were used) and lack of nutrition and individuality, prisoners also lived in extremely crowded conditions. Where 200 men should be living according to the size of the housing, 2,000 men were living there. The beds were not divided but rather a huge wooden bunk bed.

The true situation of the camp was not portrayed in newspapers as such. Work camps were supposed to be something good for the country. The Nazis didn’t build murder camps in their back yard in order to hide what was happening in a neighboring country like Poland. There were numerous concentration camps in Germany and a few death camps as well, but Dachau is not considered to be one of them. It is still estimated that there were 200,000 prisoners at Dachau and deaths as high as 30,000.

If someone tried to escape the camp, they would have most likely failed due to the ditches and large electric fences around the grounds. There was also an SS academy (SS: “Schutzstaffel”- a Nazi security group) nearby as a final threat. Prisoners also saw the academy when they were walking by foot to the camp during arrival–a threatening introduction to Dachau. Sick were kept separately until they got better (if they got better). Even some experiments were held there such as tests with air pressure to see what humans could withstand as well as hypothermia experiments. Hundreds of prisoners suffered, died or were executed in the medical experiments.

Political prisoners, who had attempted to murder Hitler or who had committed similar crimes, had larger quarters in special facilities. For example, Georg Else, a Swabian carpenter who attempted to kill Hitler on a lone mission, lived under relatively favored conditions until he was shot dead in front of a wall in Dachau. Else had installed a time-bomb in the Munich Beer Hall, where Hitler commemorated the anniversary of the failed Nazi 1923 putsch. Due to foggy weather, Hitler changed his travel plans to an earlier train ride and the bomb went off after Hitler was already gone. Such political prisoners were killed before the camp was liberated by Americans under Hitler’s orders. If seeing all these horrible facilities as an informational museum wasn’t heart-breaking enough, they also played a film that told the story of the Holocaust and of Dachau with original footage.

There are also numerous artistic and religious memorials throughout the grounds that commemorate the victims and urge us to never forget. WWII and the Holocaust are discussed to great extent in American schools. What isn’t discussed enough is the 150 years leading up to the Nazi siege of power, which teaches us how such horror developed due to political instability and poor living and working conditions. The horrible crimes that were committed were not based on a single decision, but were part of a long process of terror, propaganda and total control by the Nazi government. We might be aware of fascist aesthetics and hate among others, but would we be willing to stand up to it? Would we be passive and live off the struggle of others? Or would we too become a victimizer when our governmental authority tells us that it is okay? (A video series about social psychology– to help us understand how such horrible things could happen anywhere)

The following photos are of the various religious memorials at Dachau.

That’s it for this entry! I shared what I learned about the camp during the tour. I introduced the camp and some of what happened during the Third Reich. The Third Reich is a very extensive topic in German History. Too much has been destroyed and lost to even paint a full picture of every atrocity that happened at Dachau. But, we know enough to hopefully never allow something like the Holocaust to happen again. And I hope that you are feeling grateful rather than depressed after reading this. I strongly recommend Man’s Search for Meaning by Viktor Frankl. The book is a response to the question: “How was everyday life in a concentration camp reflected in the mind of the average prisoner?” Frankl was a psychologist and Auschwitz concentration camp inmate.  It is a book that very well may change your perspective about the purpose of life.

Currently, German students take day trips to such camps to learn about the Holocaust. Learning about history is just as important as being aware of what is happening in the moment all around the globe. Remember, not all Germans were Nazis and not all Nazis were German. We should never forget, be informed of today’s news and self-reflect. Thanks for reading about my experience at Dachau!